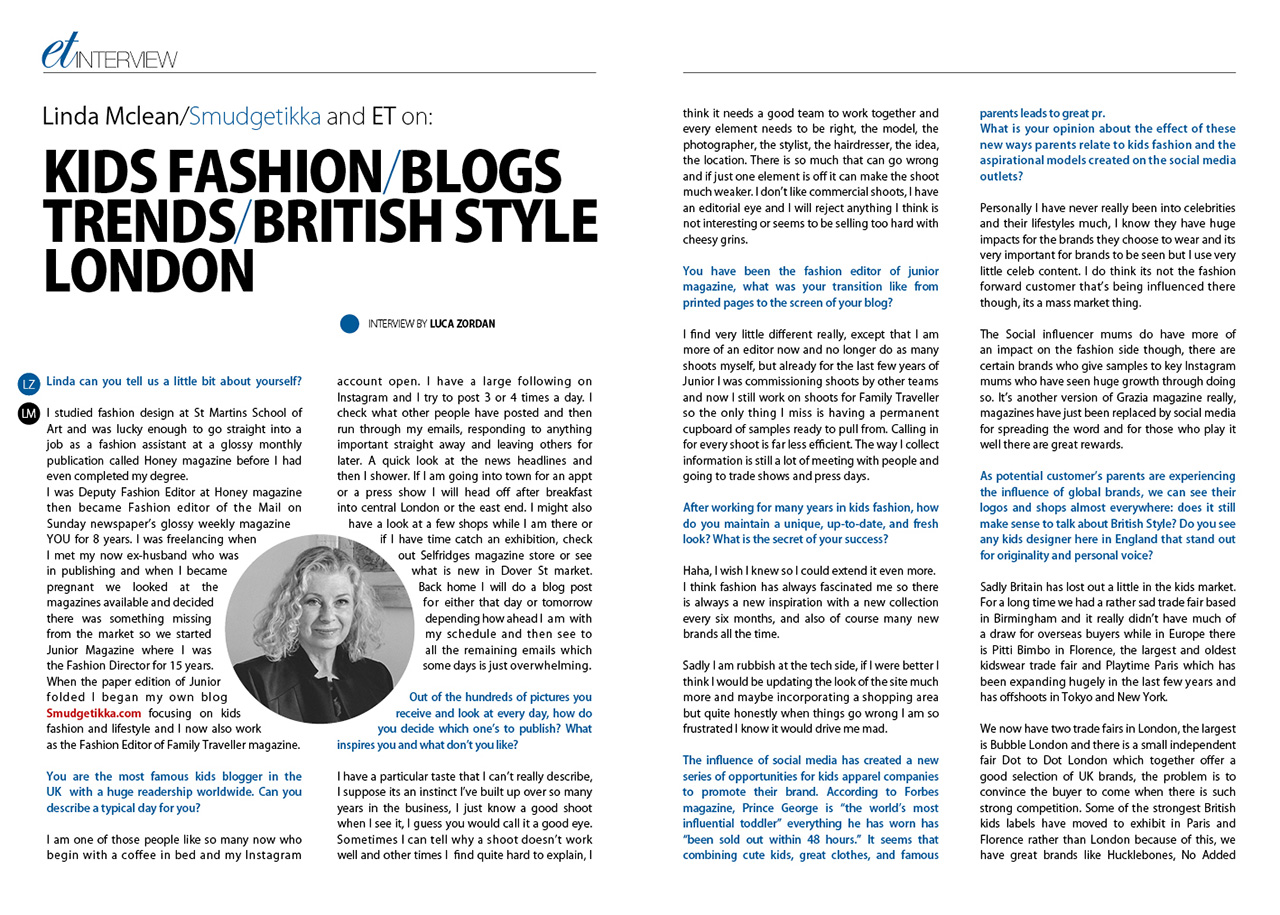 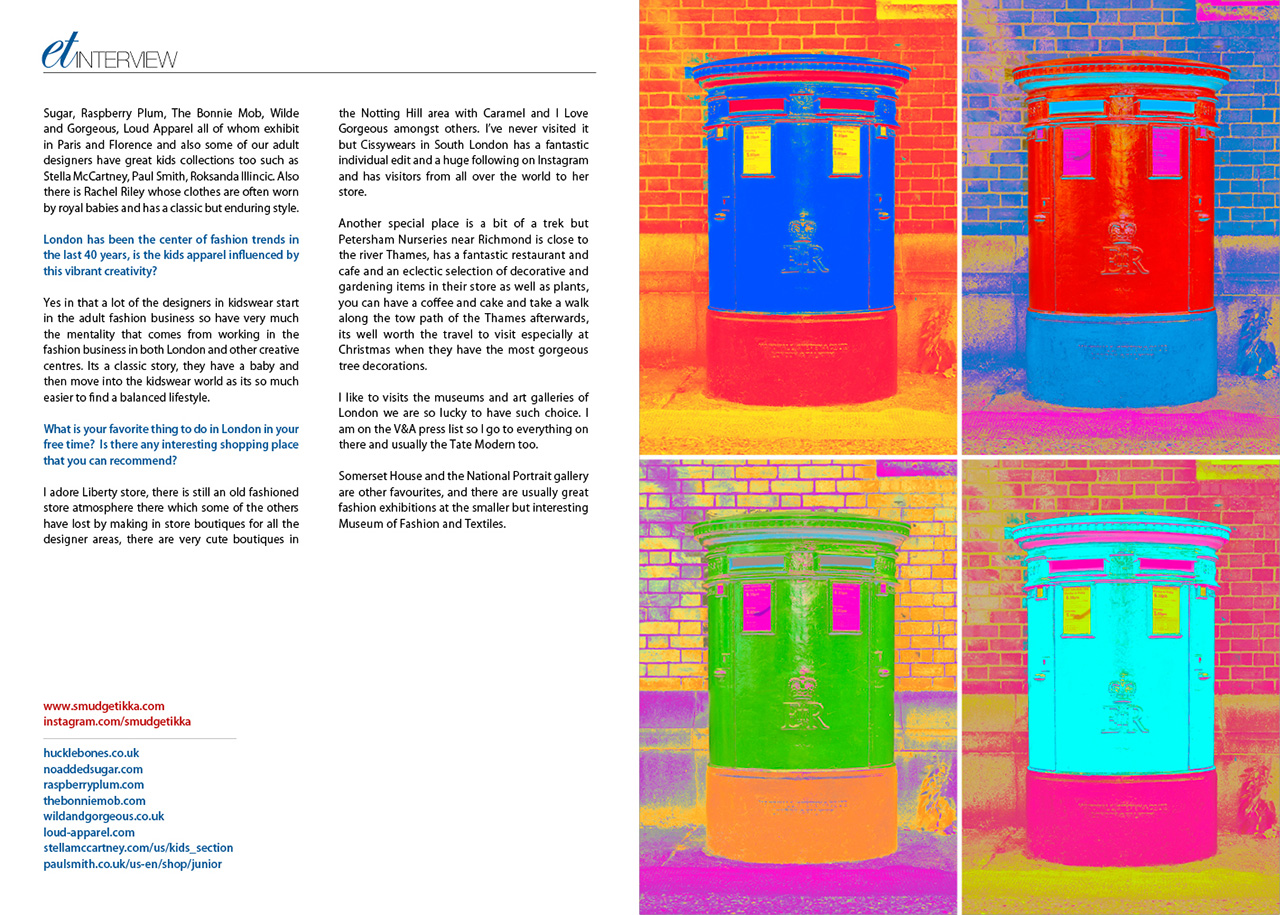 Linda Mclean/Smudgetikka and ET on:

Linda can you tell us a little bit about yourself?

I studied fashion design at St Martins School of Art and was lucky enough to go straight into a job as a fashion assistant at a glossy monthly publication called Honey magazine before I had even completed my degree. I was Deputy Fashion Editor at Honey magazine then became Fashion editor of the Mail on Sunday newspaper’s glossy weekly magazine YOU for 8 years. I was freelancing when I met my now ex-husband who was in publishing and when I became pregnant we looked at the magazines available and decided there was something missing from the market so we started Junior Magazine where I was the Fashion Director for 15 years.When the paper edition of Junior folded I began my own blog Smudgetikka.com focusing on kids fashion and lifestyle and I now also work as the Fashion Editor of Family Traveller magazine.

You are the most famous kids blogger in the UK with a huge readership worldwide. Can you describe a typical day for you?

I am one of those people like so many now who begin with a coffee in bed and my Instagram account open. I have a large following on Instagram and I try to post 3 or 4 times a day. I check what other people have posted and then run through my emails, responding to anything important straight away and leaving others for later. A quick look at the news headlines and then I shower. If I am going into town for an appt or a press show I will head off after breakfast into central London or the east end. I might also have a look at a few shops while I am there or if I have time catch an exhibition, check out Selfridges magazine store or see what is new in Dover St market. Back home I will do a blog post for either that day or tomorrow depending how ahead I am with my schedule and then see to all the remaining emails which some days is just overwhelming.

Out of the hundreds of pictures you receive and look at every day, how do you decide which one’s to publish? What inspires you and what don’t you like?

I have a particular taste that I can’t really describe, I suppose its an instinct I’ve built up over so many years in the business, I just know a good shoot when I see it, I guess you would call it a good eye. Sometimes I can tell why a shoot doesn’t work well and other times I find quite hard to explain, I think it needs a good team to work together and every element needs to be right, the model, the photographer, the stylist, the hairdresser, the idea, the location. There is so much that can go wrong and if just one element is off it can make the shoot much weaker. I don’t like commercial shoots, I have an editorial eye and I will reject anything I think is not interesting or seems to be selling too hard with cheesy grins.

You have been the fashion editor of junior magazine, what was your transition like from printed pages to the screen of your blog?

I find very little different really, except that I am more of an editor now and no longer do as many shoots myself, but already for the last few years of Junior I was commissioning shoots by other teams and now I still work on shoots for Family Traveller so the only thing I miss is having a permanent cupboard of samples ready to pull from. Calling in for every shoot is far less efficient. The way I collect information is still a lot of meeting with people and going to trade shows and press days.

After working for many years in kids fashion, how do you maintain a unique, up-to-date, and fresh look? What is the secret of your success?

Haha, I wish I knew so I could extend it even more. I think fashion has always fascinated me so there is always a new inspiration with a new collection every six months, and also of course many new brands all the time. Sadly I am rubbish at the tech side, if I were better I think I would be updating the look of the site much more and maybe incorporating a shopping area but quite honestly when things go wrong I am so frustrated I know it would drive me mad.

The influence of social media has created a new series of opportunities for kids apparel companies to promote their brand. According to Forbes magazine, Prince George is “the world’s most influential toddler” everything he has worn has “been sold out within 48 hours.” It seems that combining cute kids, great clothes, and famous parents leads to great pr. What is your opinion about the effect of these new ways parents relate to kids fashion and the aspirational models created on the social media outlets?

Personally I have never really been into celebrities and their lifestyles much, I know they have huge impacts for the brands they choose to wear and its very important for brands to be seen but I use very little celeb content. I do think its not the fashion forward customer that’s being influenced there though, its a mass market thing. The Social influencer mums do have more of an impact on the fashion side though, there are certain brands who give samples to key Instagram mums who have seen huge growth through doing so. It’s another version of Grazia magazine really, magazines have just been replaced by social media for spreading the word and for those who play it well there are great rewards.

As potential customer’s parents are experiencing the influence of global brands, we can see their logos and shops almost everywhere: does it still make sense to talk about British Style? Do you see any kids designer here in England that stand out for originality and personal voice?

Sadly Britain has lost out a little in the kids market. For a long time we had a rather sad trade fair based in Birmingham and it really didn’t have much of a draw for overseas buyers while in Europe there is Pitti Bimbo in Florence, the largest and oldest kidswear trade fair and Playtime Paris which has been expanding hugely in the last few years and has offshoots in Tokyo and New York. We now have two trade fairs in London, the largest is Bubble London and there is a small independent fair Dot to Dot London which together offer a good selection of UK brands, the problem is to convince the buyer to come when there is such strong competition. Some of the strongest British kids labels have moved to exhibit in Paris and Florence rather than London because of this, we have great brands like Hucklebones, No Added Sugar, Raspberry Plum, The Bonnie Mob, Wilde and Gorgeous, Loud Apparel all of whom exhibit in Paris and Florence and also some of our adult designers have great kids collections too such as Stella McCartney, Paul Smith, Roksanda Illincic. Also there is Rachel Riley whose clothes are often worn by royal babies and has a classic but enduring style.

London has been the center of fashion trends in the last 40 years, is the kids apparel influenced by this vibrant creativity?

Yes in that a lot of the designers in kidswear start in the adult fashion business so have very much the mentality that comes from working in the fashion business in both London and other creative centres. Its a classic story, they have a baby and then move into the kidswear world as its so much easier to find a balanced lifestyle.

What is your favorite thing to do in London in your free time? Is there any interesting shopping place that you can recommend?

I adore Liberty store, there is still an old fashioned store atmosphere there which some of the others have lost by making in store boutiques for all the designer areas, there are very cute boutiques in the Notting Hill area with Caramel and I Love Gorgeous amongst others. I’ve never visited it but Cissywears in South London has a fantastic individual edit and a huge following on Instagram and has visitors from all over the world to her store. Another special place is a bit of a trek but Petersham Nurseries near Richmond is close to the river Thames, has a fantastic restaurant and cafe and an eclectic selection of decorative and gardening items in their store as well as plants, you can have a coffee and cake and take a walk along the tow path of the Thames afterwards, its well worth the travel to visit especially at Christmas when they have the most gorgeous tree decorations. I like to visits the museums and art galleries of London we are so lucky to have such choice. I am on the V&A press list so I go to everything on there and usually the Tate Modern too. Somerset House and the National Portrait gallery are other favourites, and there are usually great fashion exhibitions at the smaller but interesting Museum of Fashion and Textiles.